While the Pathfinder RPG is far too cumbersome for my tastes, I do admire Paizo's related miniatures.

The Rise of the Runelords pre-painted miniatures were released several weeks ago, but I only recently picked up a case.  The Sentry Box, after no small amount of arm-twisting, finally agreed to sell me a case of 128 miniatures for $400, the same price that Paizo was advertising on their website.

I was looking forward to this set of miniatures, as it includes several miniatures based on the artwork of Wayne Reynolds, an artist whose illustrations I enjoy. 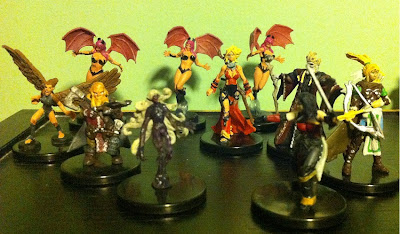 I didn't take photos of all of the miniatures, but here is a fairly representative sample of the figures that come in the Rise of the Runelords set.  Among the figures are several iconic characters, including Seoni (centre) and Harsk, some npcs and what I presume are succubi and harpies. 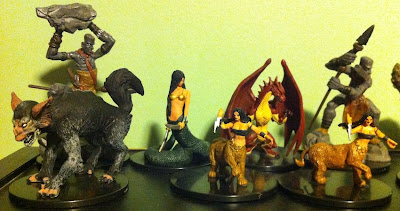 The grey giants in the back row are stone giants.  There is also a red dragon in the back row and a pair of lamias in the front row, plus some other monsters that must be peculiar to the Pathfinder game. 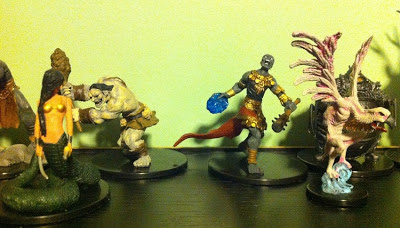 Here's another stone giant, who appears to be casting some sort of ice globe, flanked by more of those Pathfinder-specific monsters.

The above appear to be more monsters and npcs.  Someone who knows more about the Rise of the Runelords adventure path can probably identify these.  The sculpts and paint jobs are very well done, considering the regular-sized figures cost me only $2.50 each, with the large figures double that. 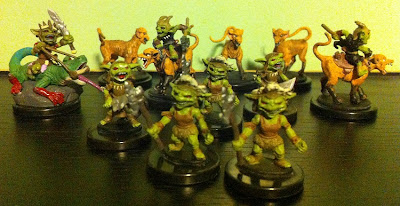 I'm not much of a fan of the Pathfinder goblins.  As part of the case of miniatures, I came into possession of 11 goblin miniatures:  3 goblin dogs, 2 dog riders, a goblin riding an alligator, and 5 goblins on foot.  I have no use for these (I have 50+ LOTRSBG goblins that I much prefer to these fellows) so if anyone is interested in these figs, i'm willing to part with them for $30, which includes shipping within North America.
Posted by Aaron E. Steele at 12:28 AM


They look good. I can't paint well so prepainted minis are always a big hit with me. Are they the same size as the old WotC minis?

i'd love those goblins. or at least my boys will...

i just sent you an email.

If brink doesn't take those goblins, I will.

Sorry I didn't see this earlier, or I might have added those goblins and their critters to my collection.

Sadly, the goblins are gone, but no fear, i'm sure there will be more goblins in the next set of Pathfinder minis that I will be unloading.

They look good. I can't paint well so prepainted minis are always a big hit with me. Are they the same size as the old WotC minis?

Essentially the same size, I don't see how anyone would notice any difference.