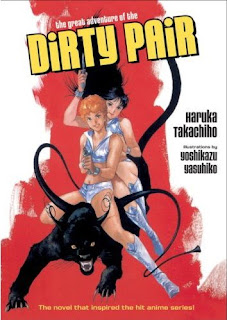 At the risk of attracting the Hentacle and cosplay crowd, i'm going to post about the tentacled Displacer Beast (apparently the pet of the Dirty Pair), a criminally underutilized Dungeons and Dragons villain.

The Displacer Beast is a fascinating addition to the DnD universe, appearing very early in the bestiaries of the Dungeons and Dragons role playing game. The Displacer Beast dates back to the 1975 Greyhawk D&D supplement and is based on an antagonist created by A. Elton van Vogt in 1939. That creature is the Coeurl, and appears in the story "Black Destroyer". It, along with the Ixtl from van Vogt's "Discord In Scarlet", provided inspiration for the Aliens Movie cycle.

In Dungeons and Dragons, the Displacer Beast is described as a black, six-legged, puma-like creature, with at least two tentacles sprouting from its back. The original 1977 AD&D Monster Manual does not tell us how big it is. However, it has six hit dice, suggesting that it is fairly large.

In the DnD mythology, the Displacer Beast and the Blink Dog are described as mortal enemies, not surprising since Displacer Beasts are evil and Blink Dogs, good. Pictured above is a pack of Blink Dogs, chowing down on a dead Displacer Beast. This looks to be a David Trampier piece, but someone can correct me on that score. The bottom illustration from the 1977 Monster Manual is definitely Trampier. 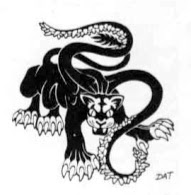 The image below is from Tony DiTerlizzi's blog. He was the illustrator for the 1994 Monstrous Manual Displacer Beast. In the Monstrous Manual, we discover that the Displacer Beast is eight to 12 feet long. It's notable ability is that it appears to be "displaced" several feet from its actual position. A rather banal ability, which simply makes it more difficult to hit in combat. Yawn. 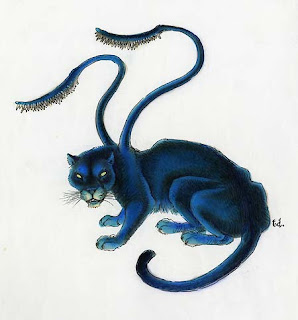 I say that the Displacer Beast is an underutilized villain, because the creature on which it is based makes for an interesting denizen within the first three levels of a dungeon. To give you a sense of its potential, I give you a passage from a review of Voyage of the Space Beagle, from The Quill & The Keyboard: 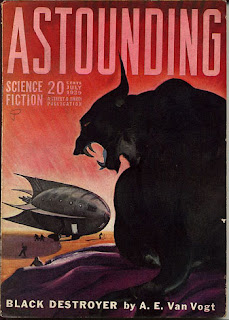 "Coeurl (the Displacer Beast) tries to pass himself off to the Earthmen as an animal worthy of study, but his insatiable hunger, criminal nature, and contempt for the primitive visitors exposes him to suspicion after he murders one of the crew. Soon it is a battle of wits as Coeurl keeps the Earthmen guessing while the explorers try to determine the alien's guilt and the extent of its incredible powers."
Not all dungeon denizens are meant to be fought, at least not initially. In the case of the Displacer Beast, this creature is better utilized as a source of adventure hooks. 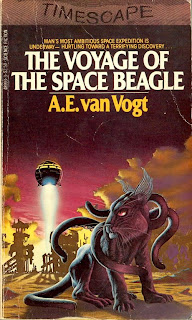 In Voyage of the Space Beagle, the Coeurl needs to feed off the id of its' prey. What if the id is analogous to hit dice, and the Displacer Beast gets more bang-for-the-buck from those with higher hit dice?

The Displacer Beast then, rather than killing a party, encourages them to capture high hit dice monsters (say, a couple of Ogres that "stole and item from him") and bring them to him. The Players need not know that the Displacer Beast is using the party to feed his evil hunger.

To protect the Displacer Beast from harm, at least initially, I would suggest that the Displacer Beast be able to create a field of darkness around itself, from which it parlays with the adventurers. Hints as to who is speaking from the darkness may be dropped, by occasionally having a tentacle wave from the darkness, and allow the dispel magic, light or dispel darkness spells to interfere with this creature's field of darkness ability.
Posted by Aaron E. Steele at 4:48 PM

Lets also not forget the fact that the story also indicates that the creature is one member of a pretty advanced culture. There were others of his kind in hibernation there. The story background might make a great stop on a plane hopping campaign. I've also thought about having the regular displacer beasts being a servant race of the greater ones as well. Eric Fabiaschi

"This looks to be a David Trampier piece"

Tentacles are always creepy, particularly if you dont know what they're attached to...

Needles said...
Lets also not forget the fact that the story also indicates that the creature is one member of a pretty advanced culture.

That's why I think he should be played as a more cerebral villain, since he is intellectually superior.

Thanks! And thanks for those links, I love that Pathfinder image of the Displacer Beast.

It certainly had that Trampier vibe, including the howling dog, which added a humorous touch to the piece.

Wow. I've always thought the Displacer Beast was a pretty uninteresting monster before, but after reading this post and "Black Destroyer," I don't think so anymore. I'm going to use your idea of having a modified Coeurl on the first three levels of the mega-dungeon I'm starting work on. Thanks!

Staples said...
Wow. I've always thought the Displacer Beast was a pretty uninteresting monster before, but after reading this post and "Black Destroyer," I don't think so anymore. I'm going to use your idea of having a modified Coeurl on the first three levels of the mega-dungeon I'm starting work on. Thanks!

You're welcome! Best of luck with the megadungeon.

Any interest in working up your own version for my MMMM book? I can probably get a friend to draw a coeurl for inclusion in the book...

Just stumbled across this article while looking for displacer beast pics on Google - very cool!