Dungeon Entrance To Die For, Part 2 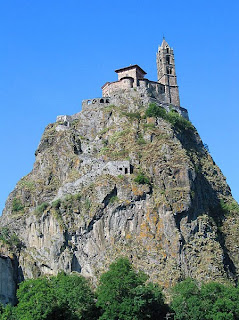 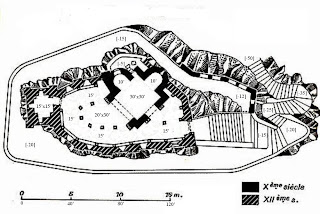 Several weeks ago, I posted some illustrations and photos of the famous Chapel of St Michael d'Aiguilhe, Le Puy. In my post, I mentioned how much I would love to get the floorplans to that Chapel, to use it as the entrance to a megadungeon.
The amazing Albert, of Catalonia, and Rorchach Hamster both sent me the link to the floorplans of the Chapel of St Michael d'Aiguilhe, Le Puy. Much appreciated!
Considering the actual size of the chapel (based on the scale that accompanies it), i've doubled the size, so that the main chapel area is 30'x30', instead of its actual 15'x15'. That will necessitate a doubling of the size of the mountain's base and height, which means it would be over 500' high.
That's a lot of steps to climb.
Posted by Aaron E. Steele at 12:05 PM

That's a great floorplan that is actually quite usable for gaming. Thanks for posting.

I've been looking at plans for castles atop steep mountains. This will come in very handy. :)

I've been wanting to get a copy of those floorplans too. Thanks!

If the adventurers get back out, at least it's all down hill from there! :)

Mont Saint-Micheal is another one that may interest you.

Very cool. One that I'd think would be incredibly cool is Predjama Castle and the Postojna cave system in Slovenia. I visited about two years ago and it is hands down the closets to a dungeon delve castle as I've ever been to. Predjama is a huge castle built into the mouth of a cave. Not only that, but there is evidence that the site was built up as a defensive position for THOUSANDS of years from stone age all the way though the Renaissance and has a very creepy feel. I'm not quite sure if the Postojna cave system connects up to Predjama but the castle is only 8 KM away from the main cave entrance for the system. The cave system is over 27 KM long. I definitely want to go back!

@J.Bingham: They do meet up, at keast according to a wiki article -
"A secret natural shaft leads out of the castle, which Erazem ordered to be enlarged, and leads into Postojna Cave. This shaft allowed Erazem to secretly supply the castle with food in the time of the siege; he also used it to continue with his robberies."

WOW! What a view. I cannot imagine wanting to actually assault this in game. With all of the catacombs and stuff that you could fill from a fantasy standpoint under this would be a wonderful adventure indeed!

Glad it's been so well-received!

I'm still trying to get my head wrapped around the "volume" of the mountain, so I can design a dungeon that fits inside it, and has suitable exits at various levels.