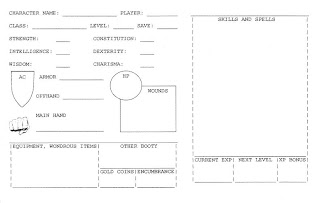 I'm sticking with my 4x6's but I like this quite a bit.. something about the dashes harkens back to the 8-bit dot matrix Apple][/Atari800/C64 days of old school glory! I'm sure it goes without saying that the backside continues the equipment list.. Cos my guys are gonna want more than just a backpack, torches, flint, and spikes - I'm just saying! ;) Tiny PC card design is a challenge! Love the wounds bit, btw. Thanks for sharing.

You guys crack me up...in a good way. :D
--First time I've seen guys bragging about how tiny something of their was. ;) j/k :D

@Timeshadows: the last thing you want to do is wave your big character sheet in front of the DM. You're just asking for trouble.

@ze bulette: exactly the retro effect I was aiming for, unfortunately I have no idea where to find a dot matrix printer

I am a big fan of the 1 page character sheet. Nice work.

Yes, dare I say it, this is some good sheet.

There has to be a program out there that can print out what looks like dot matrix on an ink jet or laser printer.

BTW, a Tunnels & Trolls character sheet has always fit on a 3x5.
--May want to check 5th Ed. out if you haven't already. :D

I made a half-page (that's half an 8.5x11) sheet with nothing on the back. Seems to work really well and it slips right into our booklets :P

So far it looks like players use the blank back for spellbooks, mostly.

I always keep my S&W characters on a single 3x5 card, including equipment, misc loot (on the back) and spells (also on the back).

That said, I love this post--particularly this part: "eye-color, to her turn-ons" (emphasis mine). Of course!

@all: thanks, glad you found the topic worthwhile!

@timeshadows: sorry to hear if it caused you some sleepless moments! Always nice to have some humor injected into my otherwise too-earnest blog! I am intending to check out T&T, thanks for the reminder.