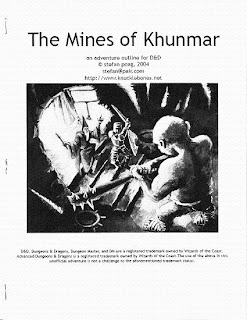 I don't know about the rest of you, but the recent publication of Michael Curtis' Stonehell has resurrected my fascination with the megadungeon.

The Stonehell megadungeon was seemingly inspired by ruminations, almost a year ago, regarding the feasibility and advisability of attempting a commercial megadungeon. While some pounded their chests and rent their garments, lamenting the impossibility of the task, others (like Curtis, Joe Bloch and Chevski) took action, one producing Stonehell, the second creating Castle of the Mad Archmage, and the third setting up megadungeon.net. In addition, Chevski's recent efforts to create a Dwimmermount setting banner suggest the possibility of another megadungeon in the offing.
Mind you, other than the efforts of those three bloggers, what other old-schoolers have undertaken the task of creating and sharing their own megadungeons? It seems like most of us in the blogosphere have moved on to new affronts and fascinations, such as the red-box, d6 weapon damage, science fantasy and sword-and-planet. I include myself here. I hope that's not the case, that there is still room for enthusiasm regarding the creation and use of megadungeons amongst D&D players.
When polling old-schoolers, one of the oft-referenced, "definitive megadungeons" is The Mines of Khunmar. Created by Stefan Poag in 1980, and published in 2004, The Mines of Khunmar is subtitled "An Adventure Outline" rather than megadungeon. That 58-page, free download comprises 12 pages of cover and background materials, and 8 Dungeon levels and sub-levels, spread over 46 separate map-pages. The Mines of Khunmar is well worth checking out, to see why many old-schoolers suggest it is a good example of megadungeonery.
Considering that The Mines of Khunmar is some 46 map-pages, you might think that it is a far more substantial, adventuresome offering than, say, Curtis' 20 map-page Stonehell. Yes, Khunmar is adventuresome, but Curtis' Stonehell environment is far more dense and compact, so more rooms and encounters are packed into each level of Stonehell.
The Mines of Khunmar contains a cornucopia of underground dungeon tropes that are expected of a megadungeon adventure: underground rivers, lakes and pools, chutes, gently-sloped passages to lower dungeon levels, vaulted caverns, abandoned temples, undead-filled tombs, throne-rooms, warring monster tribes, labyrinths, deadly tricks and traps, magical gates, rivers of lava, abandoned gold mines, dragons, demons, bottomless chasms, and monsters a-plenty. It also lacks any over-arching story: there is no BBEG to defeat, no epic battle to wage in the last room of the last level; there is no plot-line to follow, and no hooks or sign-posts that need to be satisfied.
Posted by Aaron E. Steele at 7:48 PM

@Blair: Like Stonehell, Khunmar is (in my mind) near to being the perfect mega-dungeon. It needs some polishing and elaborating, and perhaps some additional flavoring.

@bliss: thanks, I added mad arch mage to my post!

The Megadungeon is becoming so popular we have devoted a seminar to it for NTRPG Con! Paul Jaquays, Rob Kuntz, Allan Grohe and Jason Cone will all give their opinions and ideas on this D&D concept...

Badmike, David: thanks for confirmation that there's still much enthusiasm for the megadungeon!