Avalon Hill's Magic Realm is a clever melding of board game and roleplaying game.

While there is, admittedly, a game-board, which the players construct before beginning play, the game mechanics encourage both in-character player interaction and diplomacy, and provide incentives to hew close to your character's default role. Your experiences while adventuring within the Magic Realm will often reinforce your default role, but can occasionally provide you with novel new paths to victory.

The measurement of victory in Magic Realm is determined by the players. After selecting one of 16 Magic Realm characters, each player secretly records their individual victory conditions. If, by the end of the game, any or all have achieved their victory conditions, those that do so, win the game. 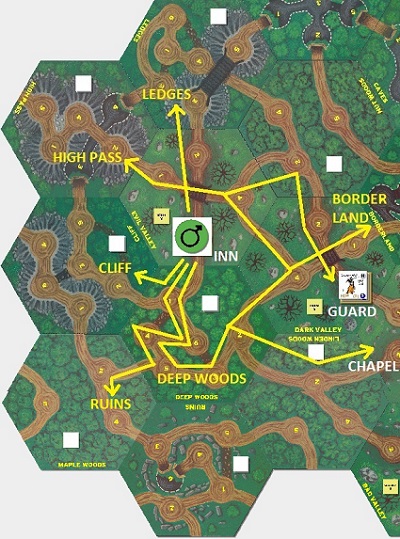 Here is a Magic Realm game I just recently started. In the centre of the game board is my character, the Black Knight, relaxing at the Inn, whilst keeping a watchful eye on the Rogues carousing there.  Before him are a plethora of options for adventure.

In this game, immediately to the north of the Inn are the Ledges.  The Ledges, along with the Cliff to the west and the Deep Woods to the south, are generally teaming with monsters and treasure.  Further to the south, following a somewhat circuitous route through the Maple Woods, are the Ruins, one of the Black Knight's favorite stomping grounds, as they are well-known for a pair of Trolls, easily dispatched by the Black Knight.  To the northwest lies the High Pass: it's underground passage can be accessed though the Cliff; or, if the mountain pass is preferred, the Deep Woods and Evil Valley is our alternate route.  We can also follow that same route to visit the Borderland, to the east, however the Borderland is generally worth shunning, as it is riddled with underground passages from which hordes of deadly goblins emerge.

All of these adventure locations are immediately available to the Black Knight.  And the player might be tempted to invoke their agency and visit one or more of them.  However, the Black Knight, while heavily armored and wielding his mace to deadly effect, is better off first visiting the Guards.  It will take three days to travel to the Guardhouse, but it is worth it, as the Guards are the Black Knight's sworn enemies, and he is notoriously effective at dispatching them, thereby accessing the treasure and weapons they possess.  Several of the weapons possessed by the Guards, such as the axes and broadswords, make the Black Knight an even more formidable foe.

The Chapel to the southeast is another tempting destination.  The Knightly Order residing there possesses the Black Knight's favorite weapon, the Morningstar.  However, the Order rarely parts with it for less than two or three times its' worth.  The Black Knight needs to find some gold or treasure first, before haggling (or tangling) with the Order.

My plan for the first couple of game days: travel as quickly as possible to the Guardhouse, dispatch the Guards there, and start amassing my fortune from the loot they leave behind.  My victory conditions: a little bit of Fame (from the opportunistic killing of smaller monsters), a lot of Notoriety (from slaughtering the Guards and any other Magic Realm denizens that dare cross me), and a little bit of Gold.
Posted by Aaron E. Steele at 5:39 PM

I'm still profoundly tardy in catching up with all your Magic Realm posts (and still need to read the handy rules link you posted that one time) but I'm wondering how amenable the game is to superimposing a homebrew setting. Westeros comes to mind. ;)

I'm not sure what advice I can give you about applying the Westeros setting.

I'd try a couple of games in the Magic Realm world and see what you discover. Then bring in some additional ideas.

Check out Realmspeak, which is a computer version of Magic Realm. Realmspeak will allow you to try out different strategies without the inconvenience of setting up the board everytime.