In Which Zombies Eat Our Brains 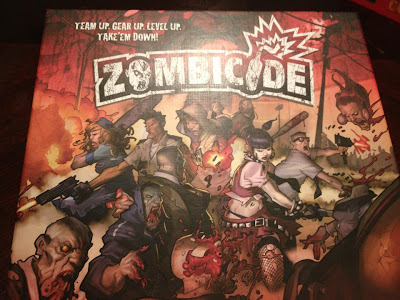 In celebration of Halloween, we played a couple of games of Zombicide, both last and this weekend.  I purchased Zombicide through one of several Kickstarters I recently participated in.  The rules are very easy to grasp, and Zombicide does a great job of emulating the Zombie-movie genre.  The zombies just keep piling on. 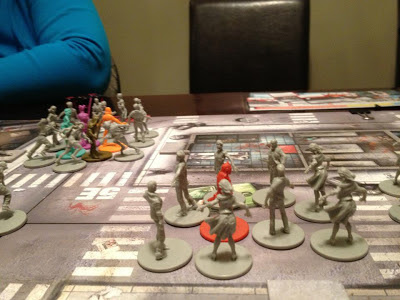 One of early forays into the land of zombies resulted in only one death, as Rob (playing the red figure in the centre of the photo above, and lying on its side in the photo below) "took one for the team" so that the other four survivors could escape with the food we had foraged. 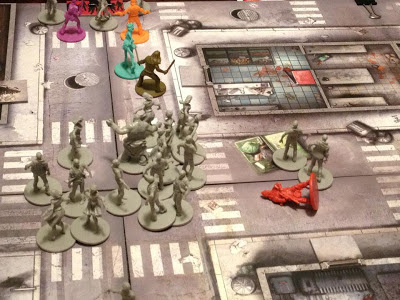 Our most recent game of Zombicide did not end nearly as well: a Total Party Kill.  The picture below shows the last two survivors, Rob and Anita, completely surrounded by zombies, with a street-full of zombies pressing up right behind them.  At this point the survivors were out of molotov cocktails, and the rest of the party had already been eaten. 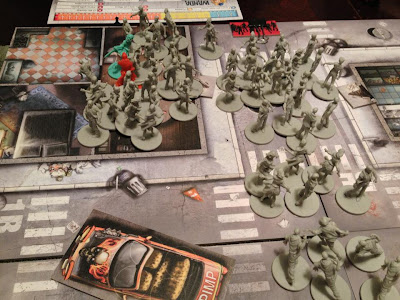 Hey Aaron, my gf's kids are huge The Walking Dead fans, and I'd love to get them a game like this for Christmas. How easy do you think it'd be for a couple of teens to pick up the rules of play for this game?

My 7-year old played this with us one evening and picked up the rules very quickly.

It's really easy to play. You have 3 actions per turn, and can move, search, fight, shoot, open door, and trade.

Finally, you draw cards to see how many more zombies enter the game.

For anyone into the Zombie genre, this is a great game.


This looks extremely cool. I'm going to have to look for this one.

Your name sake and I played this game at "The Puzzle Factory". We both give the game two thumbs up (two Zombie thumbs, that is). BTW, he now has his own Minecraft server. His last words as he drifted off to sleep were, "Mom, don't eat Zombie flesh. It will make you sick."