I've finally returned home from vacation, along with 24 used books for my Appendix N collection.  Although I visited nearly every used bookstore in the lower mainland, I discovered almost all of the purchased titles at The Book Man in Chilliwack, B.C.  Never fear; there were still plenty of Appendix N books remaining on the shelves as I departed.

What a great store.  I had the good fortune to meet the co-owner, David (above), at their Abbotsford location, who was super-helpful in finding several titles for me.

Here is the collection of books I purchased. 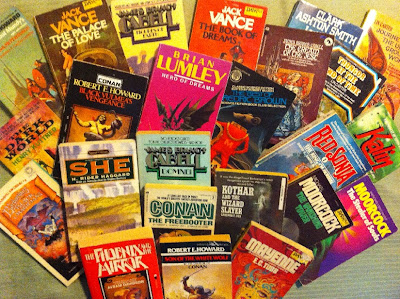 Among the titles:  She (H. Rider Haggard); The Palace of Love and The Book of Dreams (Jack Vance); Figures of Earth, Cream of the Jest, and Domnei (James Branch Cabell); Tros of Samothrace (Talbot Mundy); Flashing Swords #4, Thongor and the End of Time, and Journey to the Underground World (Lin Carter); The Stealer of Souls and The Vanishing Tower (Michael Moorcock); Mayenne and Kalin (E. C. Tubb); The Dark World (Henry Kuttner); Black Vulmea's Vengeance, Conan the Freebooter, and Son of the White Wolf (Robert E. Howard); Red Sonya 1 (David C. Smith); Hero of Dreams (Brian Lumley); Lost Worlds 1 (Clark Ashton Smith); The Best of Fredric Brown; The Phoenix and the Mirror (Avram Davidson); and Kothar and the Wizard Slayer (Gardner F. Fox).
Posted by Aaron E. Steele at 8:32 PM

I don't think I have ever read any of these (with the possible exception of the Moorcock books. I've read so many Moorcock titles I sometimes lose track of which ones I haven't read.).

This could go a long way toward explaining my lack of D&D love. I didn't really grow up on these kinds of books. Mine were all Harrison (you will be missed), Heinlein, Laumer, E. E. Smith, Bester, Niven and their ilk.

I've read a couple off your list. And Chilliwack is one of the few places in Canada I've been too (mostly through though.)

I'm a late admirer of Appendix N. Like you, my early introduction to fiction was of the science variety. I'm enjoying purchasing and reading the old fantasy as it is adding a great deal of perspective on early Dungeons and Dragons. I highly recommend tackling some of the more influential Appendix N sources, Vance, Howard, deCamp and Pratt, ad so on. I don't think doing so would be regretted.

Narmer said...
I've read a couple off your list. And Chilliwack is one of the few places in Canada I've been too (mostly through though.)

This was my first stop in Chilliwack, and I found it to be a charming little city. We were on our way home so the diversion was brief, but we're already planning a return visit.

Having watched the video I would definitely buy a book from The Book Man.

He is a delightful fellow, and what you see in the video is what he like in person. Absolutely pleasant, enthusiastic and helpful.

I thought of you and your blog when I chanced upon that book.

Good stuff! Of those listed I've read, I'd have to say Tros of Samothrace is my favorite, followed by She. You definitely need to get all of the books in the Tros series!

I have all or nearly all of the tros books so I think this was my final one. I look forward to reading the series. It sounds like they are well worth the read based on your enthusiastic endorsement.

I'm convinced they would make the best miniseries ever!

Vacation? Did you have homemade waffles?

Welleran said...
I'm convinced they would make the best miniseries ever!

I'm reading Howard's Vulmea at the moment, but I will turn my attention to Tros next.

The Happy Whisk said...
Vacation? Did you have homemade waffles?

The trick is to eat the corner ones, right out of the oven. They have the most carmelized cinnamon and brown sugar coating, being on the corners.

Paladin, you are *the* vacuum cleaner of Vance...

And I feel terribly guilty about it.

It will be me, going into used book stores, and rescuing books by vance, smith, howard and others, that would otherwise end up in the landfill.