Jim Roslof And The DSG 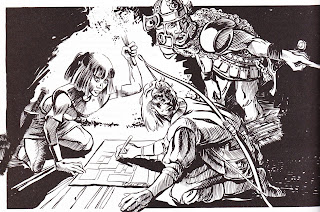 I was recently pointed to the blog of Bruce Heard, which got me to thinking about the 1986 ADnD Dungeoneer's Survival Guide and the art of Jim Roslof.

Jim Roslof illustrated about a quarter of the 33-odd illustrations in the DSG.  In my mind, his art offerings provided the real snap to this late 1st Edition ADnD guidebook. 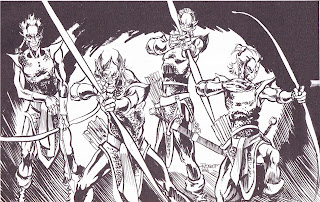 It's not surprising that the Drow should make an appearance in the illustrations of the DSG, considering that they are most famous of the underdark menaces. 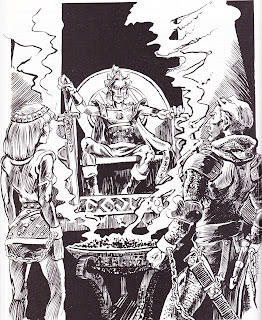 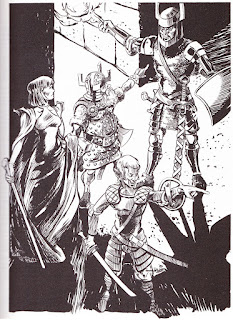 The risk of becoming lost while dungeon-delving was an important feature of old-school DnD.  Mapping is one of those activities that is eschewed by players of recent versions of DnD, as it is not "fun." 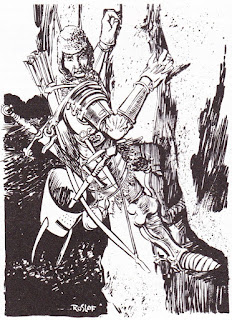 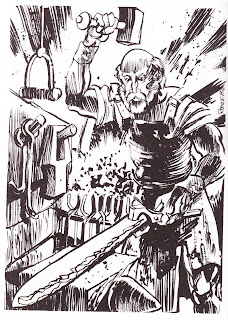 I'm ambivalent towards the inclusion of skills in DnD.  I understand the benefits, as it regularizes and legitimizes certain in-game activites.  My issue with climbing, blacksmithing and other skills is that it resulted in dice taking the place of description.  Once skills had associated proficiency levels, players picked up the dice rather than engaging in dialogue with the DM.

There are a lot of later DnD players that grew up with the art of Elmore, Easley and Parkinson.  Those three artists introduced a more posed and heroic style to the art of DnD.  The early DnD artists, like Roslof, seemed to understand the sensibilities and gaming styles of the first generation of gamers.  In particular, that the game was about the mundane activities, like lowering the party into the dungeon.  Roslof and others were still able to include a feeling of risk and danger in those illustrations.

Roslof was not the only artist involved in the DSG.  Jeff Easley, Doug Chaffee, Greg Harper and David Sutherland also provided illustrations. 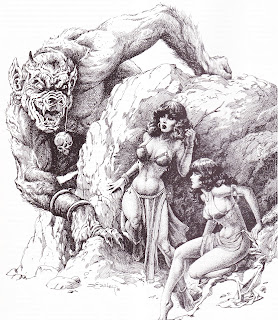 While I really like Easley's black and white art, when did DnD become about hot, scantily clad wenches? 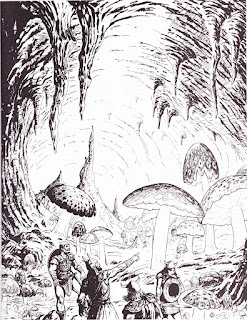 Doug Chafee's artwork in the DSG, like the mushroom infested cavern, above, focussed equally on the adventurer's and the underworld environments. 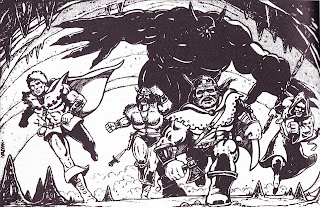 Greg Harper displays a much heavier hand when it comes to his illustrations.  I do like this piece, above, of a party fleeing from some demon-spawn.  Still, the adventurers are more heroic than the ones we see in the artwork of old-school artists like Trampier, Otus or Holloway.

This uncredited David Sutherland piece is reminiscent of the aventuring tableaus found in the ADnD Dungeon Masters Guide appendices.  It seems by 1986, DCS had been relegated to cartography and diagrams, and was no longer the go-to guy for depicting adventurers in historical armor.

I was recently looking at this book too and was struck by the sheer number of Roslof pieces. He was very talented.

Uh, when was it not about hot, scantily clad wenches? I refer you to OD&D, vol. 1, page 27 for starters.

When did DnD become about hot, scantily clad wenches?

Yeah, compared to the Amazon in Men & Magic those girls are practically Amish.

I love Rosloff's work in the Dungeon Alphabet as well. There's a lot of great artists in there, but for depictions of a party engaged in dungeoneering, he's a got a great tone and sense of humor.

DCS did all those geomorphs and maps in the book, though, so he did a lot of work. That's probably why he didn't spare a lot of time for art pieces rather than any relegation to side work by the bosses.

While I play newer systems I still prefer the old art styles of the early D&D games. They are darker, grittier and give a real sense of danger. More contemporary game art depicts characters as amazingly buff and literally COVERED with weapons. Do you think they ever hurt themselves just sitting down?

I never owned the DSG, so I didn't realize that Rosloff had so many illustrations within it.

Thanks for sharing these great pictures! :D

Vault of the Drow: The Movie - starring Lance Henriksen as Drow Soldier #1, #2...
Actually I love that Roslof draws wiry PCs :)

I'm with Black Vulmea - D&D is a wonderful stew of many ingredients, but hot chicks was always one of them.

Re DCS - I seem to recall Mike Mornard saying that DCS had always really been a map guy, and illustrative art was never really his thing. Still, no one says Old-Scholl like DCS.