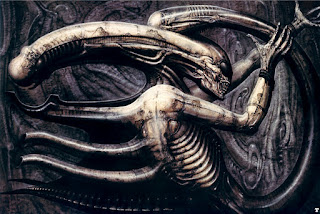 Between the release of Chevski's Thousand Suns and Ridley Scott's Prometheus trailer, 2012 is shaping up to be the year of the science fiction old school renaissance.

Ridley Scott is directing Prometheus, and directed the original Alien movie. H.R. Giger gave us the look of the Alien antagonist, the Xenomorph. The above Giger image inspired Alien's Xenomorph. 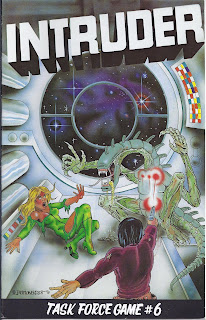 That antagonist later makes its appearance in all sorts of unauthorized spin-offs.

The first of those two is the Xenomorph's appearance in a Task Force microgame from 1980, entitled Intruder.

Intruder was designed by Dennis Sustare, known for having designed the much beloved Bunnies and Burrows RPG and Dwarfstar's engaging, if somewhat arcane, Star Smuggler microgame.

Intruder is set in the near future, on the Deep Space Station Prometheus, orbiting the star Sigma Draconis.

An exploratory team brings back an alien life form, and is directed to keep the creature alive for study. When the creature escapes from the lab, this directive proves to be a deadly mistake.

If the premise sounds familiar, it may be because it is. That is the same premise that informs the first two Aliens movies.

The second unauthorized spin-off is a Bally Midway Arcade game from 1987, entitled Xenophobe. Xenophobe is obviously inspired by the Alien movie franchise, as the goal of the game is to rid various ships, bases and planets of alien infestations.

The game allows you to play one of nine different characters. Among them: Dr. Kwack, sporting a duck head; Mr. Brace, with a Quasimoto face; Col. Truth, the spock-eared; Mr. Fogg, crazy scientist hair and a Geordie visor; Dr. Udderbay and Col. Poupon, two female chaaracters; Mr. Eeez, with a green bug head; Mr. Zordiz, the James T. Kirk of the game; and Col. Shickn, with white hair and an eye-patch. The characters wear yellow, blue and red tunics, Some also wear black slacks, given the characters a look reminiscent of early Star Trek attire.
Posted by Aaron E. Steele at 4:08 PM

As a long-time Alien fan, I really enjoyed this post. As a fellow OSR blogger, some of my most popular posts are my treatment of the xenomorph: http://digitalorc.blogspot.com/2011/05/aliens-vs-d.html

and an alien dungeon crawl: http://digitalorc.blogspot.com/2011/05/adventure-na2-death-and-lady.html

And that videogame inspired this guy to attempt a D&D campaign (with appropriate minis) based on Xenophobe: