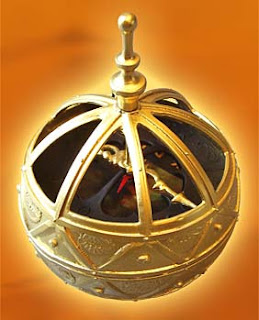 I mentioned yesterday that I was familiar with Mormon mythology. One of the magical items mentioned in the Book of Mormon is the Liahona, a holy compass.

The Liahona will only work for a cleric of the appropriate faith. If carried before the cleric, it acts like a permanent "find the path" spell, allowing the cleric to lead others along the shortest route to any location or object. It also gives the bearer the ability to roll two dice, instead of one, every time he attempts to search for something (traps, secret doors, hidden treasures, etc,). In addition, once per day, it can be used as a "commune" spell, to obtain direction from the deity.

The Liahona only works if the cleric is leading a group to achieve an objective considered appropriate to his faith.

If the cleric does something to anger his deity, or if his companions are not of the same faith, or have lapsed, this magic item ceases to function.
Posted by Aaron E. Steele at 1:54 PM

Interesting. You should do more of these (if there are more, that is).

I was just recently turned on to the potential of Mormon legends by Casey Jex Smith's presentation and am excited to see more!
- Tavis

That looks very much like the fabled Holy Hand Grenade of Antioch.