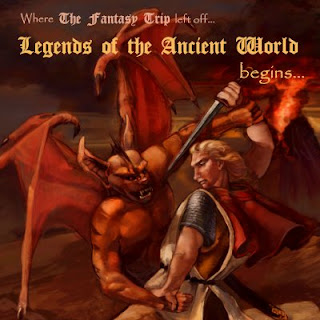 Like so many other great 'old-school' games, The Fantasy Trip (TFT), published by Metagaming Concepts in the late 70's and early 80's, has it's own retro-clone, called Legends of the Ancient World (LotAW, not to be confused with LotFP).
For those few of you that are not familiar with TFT, it began in 1977 with the game Melee, which was the third in a series of "microgames" published by Metagaming. Metagaming's microgames were small, 4" x 7" games that came in a clear pouch or cardboard box, and could be played, generally, over lunch. Melee became so popular, in the day, that it justified a second, related game, Wizards, and then a series of eight pre-programmed MicroQuest adventures, starting with Death Test. The Fantasy Trip system culminated in the publication of a set of three 8x11 saddle-stitched rulebooks, Advanced Melee, Advanced Wizard, and In The Labyrinth.
The demise of Metagaming, microgames, and The Fantasy Trip game is a sad tale, which I won't re-hash here. Fortunately, for those who are still fans of the game, there is a free retro-clone, and several new adventures published by Dark City Games. I have already reviewed two Dark City Games adventures, The Dark Vale and Wolves On The Rhine. Over the weekend, and quite by accident, I came across six more LotAW adventures at The Sentry Box, my FLGS. They included Little Black Book, The Crown Of Kings, The Island Of Lost Spells, and The Sewers Of Redpoint. Stay tuned over the next several days, as I intend to review three of them (Little Black Book is no longer in print, so i'm unlikely to give it a full review).
Posted by Aaron E. Steele at 6:58 PM

I believe that LotAW was designed in the original retro-clone sense: not to be played, but to give a venue for publishing adventures, etc. Though I could be wrong about that.

A much more complete retro-clone (though uncompleted) is Warrior & Wizard at https://docs.google.com/Doc?id=dcsfz7gv_17fmbxhpfv

Thanks for the link, I made a quick visit. How does W&W compare to LofAW? More comprehensive?

I never owned Melee or Wizards but always wanted to check them out. Thanks for sharing the link to LOtAW.

I've checked them both out somewhat, and I'd say that LofAW is closer to the original microgames put together (Melee and Wizard), and W&W is much closer to the expanded fantasy set, The Fantasy Trip (TFT) . LofAW has more of a microgame quest vibe, too, whereas W&W is more in the line of core rules for a system.

Don't get me wrong. They are both excellent; I've loved, played and run TFT since it came out, and played wizard and Melee also. Both are worthy successors.

We played the hell out of TFT in high school- compared to D&D, it had a much higher body count (although character generation was a breeze) and allowed for a more "gonzo" style of play with it's outre character races and esoteric talents.

I too played a lot of TFT back in the day.

Took it for a spin recently, with the chilluns, they had a blast.

@Doc: both good implementations, both free. What's not to like? :D

The Sentry Box is your FLGS? LUCKY!

Back when the US Dollar was kicking the Canadian Dollar's ass, I was all about getting my out of print games from them!

The Sentry Box is a fantastic store.

The sheer number of retro clones is staggering to me. Thanks for helping to keep me up to date on some of these.